One sunny Sat’day morning, aroond the middle of June,
The wife sez “We’re ganning oot, it opens at twelve noon”,
The place was packed when we arrived, the Mayor of Blyth was there,
And we had a good time at, the Cramlington Village Fair.

Flyin’ high up in the sky, wor kites the school kids made,
For those that liked their music loud, Pirhana Brothers played,
The cloggies from Newcastle danced in the village square,
And we had a good time at the Cramlington Village Fair

The wife saw a cake stall and was off like in a race,
You’d think there was nee t’morrow the way she stuffs hor face,
“You’ll put on weight” aa sez to hur, but she just didn’t care,
Cos she had a good time at the Cramlington Village Fair

Just ootside the village, across from Reynolds and Broon,
There were fair groon rides and side shows, and the big wheel spu aroond,
The kids went on a lots of rides that aa just wouldn’t dare,
So they had a good time at the Cramlington Village Fair

‘Twas there w’ saw the mother-in-law, miserable as sin,
Avoidin’ the hoose of horrors in case they kept hor in,
Then she had a game on a bingo stall and won a teddy bear,
So she had a good time at the Cramlington Village Fair

Noo ganning te fairs is thorsty work so I called in the Blagdon Arms,
Doonin’ pint after pint, obvsorvin’ the barmaid’s charms,
When aa hord the wife a callin’ me, noo I just didn’t care,
Cos aa had a good time at The Cramlington Village Fair

Some young men from the Nelson in the village caused a fight,
The boys in blue took care of them, they were locked up for the night,
But it didn’t spoil the fun we had so we’ll be back next year,
Cos we had a good time at the Cramlington Village Fair

It’s that time of year again when the funfair comes to Cramlington. When I was little the funfair was all part of the ‘Cramlington Village Fair’ which was a much bigger celebration of life in Cramlington, held throughout the town centre.  The local pubs were part of the action and there were performances in the village square along with the fairground.   Dad remembers that the original fairs included sheep trials, parachuting displays, stalls and performances by the folk club.  The very early fairgrounds covered a huge amount of space or so it seemed to someone of my small size back then.  Certainly there were fields that stretched from where ASDA now sits (it was a later extension to Manor Walks) to the back of Dunelm.

Whilst the village fair itself is no more the fairground rides continue to come to Cramlington thanks to a campaign in 2009 by a group of local young people to continue to host the rides at a new site at Eastfield when time was finally called on the use of the fields and carparks around Manor Walks.   The move seemed to ensure the continued success of the fair as a 4,500 strong crowd was reported by the Journal in 2011 and sources tell me the 2017 fair will take place from 1st – 5th June, still at Eastfield with plenty of entertainment and showcasing of the local community to accompany the rides.

The Cramlington Village Fair also brought about my first television appearance on Look North presented by Mike Neville.  In the 80s Cramlington was lucky enough to have folk workshops running at Concordia Leisure Centre run by Chuck Flemming & Bob Fox, teaching budding folk musicians of all ages. My dad had been running the Cramlington Folk Club and we loved attending the workshops with Chuck & Bob.  At that time my sister & I only played recorder.  Our workshop group somehow ended up on Look North to promote the upcoming Village Fair.  My sister and I were wearing matching outfits with tops knitted by our mum – me in pink and Pamela in mint green.  My cousin Helen and her Granny, Rosemary, known to us simply as Granny were also there.  This was the beginnings of our first itteration of the family band – Concordia.  I still remember Mike Neville, after we had performed saying “and you can see them in Cramlington tomorrow.”   You can watch the clip for yourself below.  I just watched it for the first time in years and can’t believe how miserable we look!!  From what I recall it was more fear than anything else as not only was it our first ever tv performance but also our first time in a tv studio and we knew it was going out live!

Back to the song, Dad recalls that he originally came up with the chorus line as ‘We had a good time at the Ovingham Goose Fair‘ as he and mum had plans to take a day trip to that event.  In the end they didn’t make it, so the song was ditched until not long after the first Cramlington Village Fair was announced.  As ever Dad’s talent for story telling really comes through as he takes us through a typical day at the fair from Mum announcing we were going right through to the fight in the Blagdon, which apparently did actually happen.  I also like the reference to the longstanding estate agents Reynolds & Brown, now Renown.  Songs like this will be used in future decades by historians who’ll be looking for this sort of narrative about life in Cramlington and local businesses & events.

I have such fond memories of those fairs including flying our kites as captured in the song (yes that was our school), and my dad, cousin Helen and I playing music outside The Blagdon Arms (aparently my sister Pamela refused to play)  and at some point on the back of a lorry in the carpark next to The Plough.  Other memories include my Auntie getting extremely unwell on the Waltzer when she went on with my cousin Adam, then onto my first ride on the Meteorite as a teenager.  By the time I was old enough to go into The Travellers (now John the Clerk) on a Friday night the fairground had moved to the field opposite the pub which is now the Sainsbury’s carpark and it made for some lively evenings.  The next location for the fairground after that was the field between Manor Walks and Parkside.

After experiencing the chaos of parking up at Manor Walks & the retail park on my recent visit home I can see why holding a funfair there is no longer viable.   That said though, having something for young people to do in Cramlington is as important now as it was then.  Back in the 80s there was really nothing for teenagers to do.  I remember our frustration when in 1997 the extension to the leisure centre was announced as a an over 50s nightclub – The Midas Club.  The adults had the means to travel for entertainment whilst we didn’t.  Frustration came again when the club failed and was reopened as a Gala Bingo hall!! We could catch a bus to Blyth or Newcastle for the cinema and go to Whitley Bay for ice skating but that could be quite costly for a teenager.  It’s great to see that at last Cramlington has a cinema and even a bowling alley!

Hope you enjoy the fair if you’re heading down there this year.  Remember to ‘scream if you wanna go faster’ and ‘wait til the ride stops’!  I imagine they’ve done away with ‘pay in the car, pay in the car’ these days though – if it’s anything like fairs here in Sydney you have to buy a bundle of tokens at a sales hut for an extortionate price before you ride. 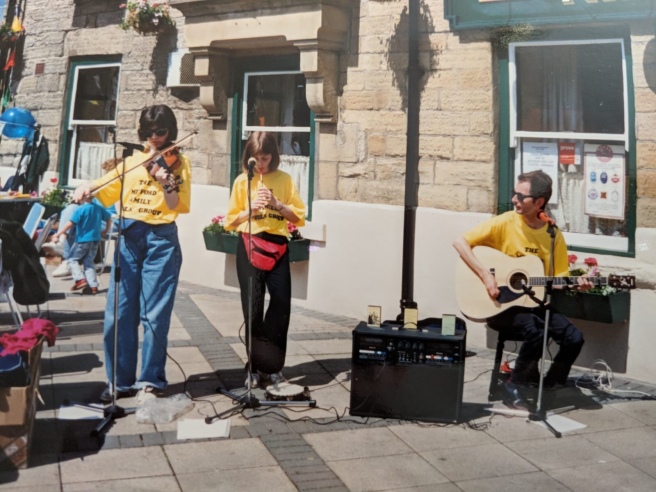 That’s Northumbria by Wilf Mitford is licensed under a Creative Commons Attribution-NonCommercial-ShareAlike 4.0 International License.
Based on a work at https://mitfordmusic.wordpress.com/.