In the North of England there’s a beautiful land,
A Kingdom of castles and silvery sands,
Where the wall built by Hadrian, the Emperor, stands,
That’s Northumbria

At Beamish a museum with a working tram line,
A steam locomotive, a famr and a mine

See Lindisfarne Priory on the island so small,
or why not go rambling away from it all,
There’s medieval banquets in castles and halls,
That’s Northumbria

At Kielder a castle, a lake and a dam,
and Kielder Forest created by man

There’s Durham Cathedral with St Cuthbert’s shrine,
And night life abounds on Newcastle on Tyne,
Where a pint of best beer is descrived as divine,
That’s Northumbria

In the North of England there’s a beautiful land,
A Kindgom of castles and silvery sand,
Where the wall built by Hadrian the Emperor stands,
That’s Northumbria 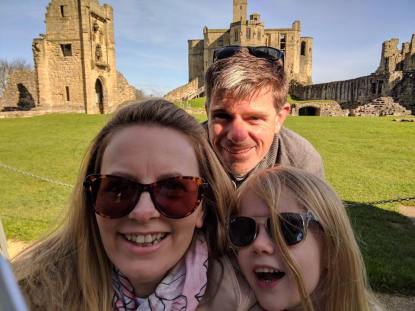 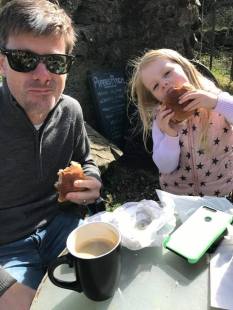 The view from Bamburgh Castle

I’ve just returned to Australia after visiting my hometown of Cramlington in the south of Northumberland.  It was the first time I’ve approached my visit home as a tourist and fI found a new appreciation for our stunning coastlines with a rich history to be found among the ruins of castles and priories.  It instantly reminded me of one of my Dad’s first songs about the area ‘That’s Northumbria’.  In fact on interviewing Dad I discovered it was his first venture away from pop style songs into a more folk style.

So on one of our many lunch dates whilst I was home, this one at Blyth’s Comissioner’s Quay pub, Wilf told me how ‘That’s Northumbria’ came about.  I was surprised to hear it was the catalyst for his new style of songwriting that would eventually lead to us forming a successful family band.   Here’s the story in his own words;

“In 1970 I did a demo tape of 12 of my songs at Impulse Sound in Wallsend studios Newcastle.  The bloke who was in the studio before me was a fella called Alan Hull, who was demo-ing songs for his new album, Lindisfarne’s next album which would be Fog on the Tyne…  I mainly recorded some of my pop songs from the 60s … The letter I got back from Hazy music (Alan Hull’s publishing company run by Barbara Hayes, Alan Hull and Dave Wood from the recording studios at Impulse Sound), saying that the song they liked the most was the song about Newcastle ’cause it was a descriptive lyric, that’s the sort of song I should write. Well I didn’t have any descriptive lyrics to think of at the time, so I was looking through this Northumbria tourist guide and I come up with a song called that’s Northumbria.  Did a demo of that.  Sent it in but they weren’t interested.  I recorded the demo of the song using a a little keyboard player – casio, I played guitar, rhythm guitar, double tracked lead guitar, did all the vocal and I did flute on the casio.   And the Northumbrian Tourist Board wanted to book the band.”

The tourist board wanted to use the song to promote the North East but sadly Dad had to explain that he didn’t have a band to reproduce the song live.  This positive experience did however lead Dad down a new path of songwriting about all things local – he says “I started to get the gusto for writing geordie songs”.  His next idea for a song would be The Jarrow Marches and after that the Tall Ships on the Tyne (coming soon).  This was soon after followed with an idea for a chorus about the Ovingham Goose Fair which eventually became the Cramlington Village Fair (also coming soon).

When Dad finally got his band together he finally got the chance for his songs to be used to promote the North.  His song The Great North Run was featured on one of the events’ anniversary videos, and we performed The Gateshead Garden Festival live at the event. I’ll post about all of those songs soon I promise!

Perhaps after our amazing trip back to Northumbria (cooincidentally the name of our 6th album) I should add a few verses about modern Northumbria?  Watch this space….

For those of you confused about the inclusion of places like Washington & Durham in the song it’s worth noting that the Northumbria Tourist Board existed from the mid 1960s to the mid 2000s and encorporated any areas considered to be part of the ‘North East of England’ down to the North Yorkshire boundary.  According to Tourism & One North East: A brief history, the confusion over the difference between Northumberland (the county) and Northumbria (the all encompassing term used to promote the North East) was one of the reasons One North East, the Regional Development Agency for the North East of England at that time, decided to disolve the NTB.

That’s Northumbria by Wilf Mitford is licensed under a Creative Commons Attribution-NonCommercial-ShareAlike 4.0 International License.
Based on a work at https://mitfordmusic.wordpress.com/.

One thought on “That’s Northumbria”